Vastu Purush is considered to be the main diety who is responsible for providing peace, happiness and prosperity in any constructed building whether it be dwelling houses or commercial complexes. The worship of VastuPurush is essential al the time of laying foundation and entering into a new premise. He is required to make offerings for his blessings.

Vastu devata or Vastu purush occupies an extremely important position in vastu construction. He is the main deity of the house. According to the shastras and puranas, once lord Shiva was engaged in a fierce battle with 'Andhakasur' daitya. During this battle some drops of Shivji's perspiration fell on the earth and an extremely huge and terrifying giant rose from them. He started terrorizing and killing the devatas. Then all the devatas got together and caught him and pressed him down on the earth with his face downwards and sat down on him to prevent him from rising again.

To pacify him they gave him a boon that he will be worshipped at all the auspicious ceremonies. All the devatas reside on his body and for this reason he is known as the vastu purush. All the wise people worship him. Whoever does not worship him faces hurdles and untimely death.

Vastu purush lies on the ground in a particular posture as shown in the figure. His head is always in the 'Ishan kona' while his feet are in the 'Nairritya kona'. The soles of his feet keep touching each other.

His knees and elbows almost touch each other and remain in the Agneya and the Vayavya kona.

When should the Vastu purush be worshipped

He is mainly worshipped at three occasions :

He is also worshipped at :

He is also worshipped under special conditions :

Karma Kanda advocates installation of different types of Vastu peethas according to the purpose of construction. Vastu purush is imagined on the area on which the house is to be constructed. In this manner we can have vastus starting from one 'pada' up to one thousand 'padas'.

The Brahma sthan is considered to be the centre of the plot. It is the focal point of all the energy. This is one of the most important points of consideration in Vastu. Brahmasthan of the vastu purush is the area around the naval, heart, lungs, stomach, secret parts and the thighs. The same principle applies to the plot also. Because such sensitive body parts of the Vastu purush are located in the brahma sthan, this place should be kept open and free from any kind of irritant like weight, pillar and the like. If the residents of the house want to live happily, then they should not construct anything in the brahma sthan. Brahma resides in the following manner in the plot. 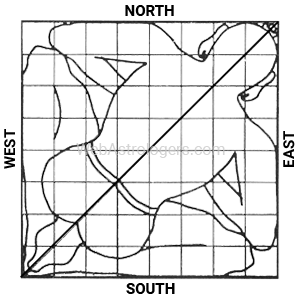 Vastu and the Gods

According to the Shastras : 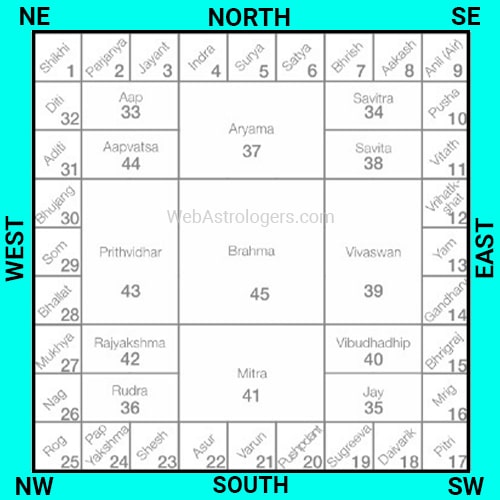 The gods are placed in the body of the Vastu purush in the following manner considering that he is lying face down. 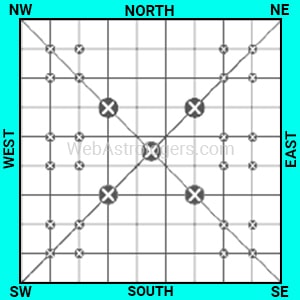 Marma sthan falls within the Brahma sthan, so nothing should be constructed in this place, otherwise the residents will suffer because of problems related to health, wealth, mind and spirituality.

This figure shows the marma sthan denoted by the dots.

Invocation and installation of Vastu purush

Vastu shanti is essential for peace, prosperity and happiness of the house. Vastu purush is the protector of every house. For vastu shanti a picture or idol of Vastu purush should be installed at the right spot in the East direction. However Sun's transit position should be noted for getting the best results.

Invocation, installation and worship of vastu purush protects the owner from mishaps and misfortune.

The manner in which you bear the load of the earth with all her mountains and oceans, similarly please protect my home, my children and my wealth. This is the prayer to Vastu purush.

They say that all the time vastu purush keeps on saying 'Tathastu'. For this reason one should never curse or speak badly in the house. One should always speak nicely and speak about auspicious things, so that auspicious things may happen in the house. Never say that there is no food and water in the house. Suppose vastu purush hears this and says 'Tathastu', then really the food of the house may get finished and hard times may follow. For this reason one should offer 'Naivedya' or prasad to vastu purush daily. If not possible then offer atleast on poornima and amavasya days. A good result will be observed within six months.

Worshipping Vastu Devata with the following mantras is especially beneficial : 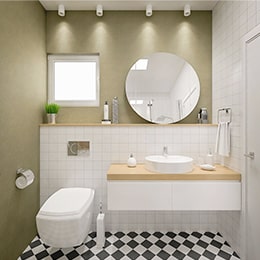 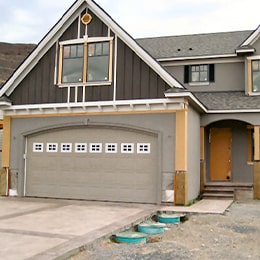 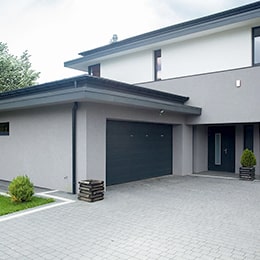 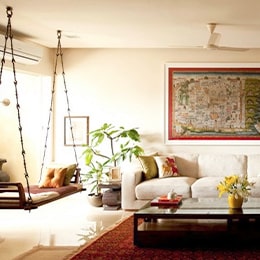 Vastu of the House