In a study, it is found that a city progresses, well and becomes strong if it is made according to the principles of Vastu. So for the development and progress of any nation, city or region it is compulsory that Vastu principles should be followed, otherwise it creates vedh and hurdles in the progress of the city. The residents of the city do not grow well socially, economically or spiritually and lack prosperity. 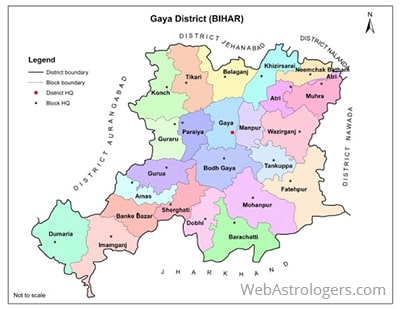 When we study the vastu of Gaya, we find that Gaya has hills in its West and South directions and a huge phalgu River in its East. Eastern part is open and has a slope which is the main cause for the stability, popularity, spiritual development and name fame for Gaya. We give it so much respect to this place that Gaya is known as Gayaji. People from distant places come here and do Pind Dan for the peace of their ancestor's souls. As a result, name, fame and popularity of Gayaji is spread all over in India as well as abroad and it will remain forever.

The negative Vastu, which is found in Gaya, is the presence of Ramshala mountains in its North and North East. Which is the major block in the economic and mental progress of Gaya people. 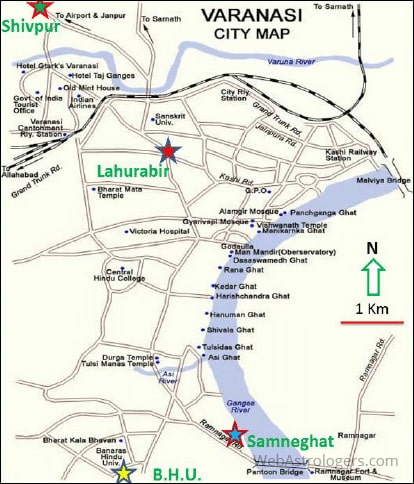 Varanasi is an ancient city which is known by several names as Varanasi, Kashi or Banaras. It is situated in Northern region and has got religious, spiritual and cultural significance. Its old name is Kashi. Varanasi is situated in the center of two rivers Varuna' and 'Asi', that is why it is called Varuna+Asi= 'Varanasi'. Varanasi is situated on the bank of the river Ganga. Ganga river is the life line of Varanasi. Ganga is The most sacred and largest river of India, Ganga covers approximately 2,525 km long distance, from Gomukh to Gangasagar (It starts from Gamukh and finally meets in Gangasagar) Throughout its way, Ganga river flows from North to South. But at flows from South to North in Varanasi. Varanasi which is also called 'city of temples', is known as (famous) Banaras in the tourist world. From Vedas to Puranas, Varanasi is description for its magnificent glory.

When we study this city from Vastu point of view find that the river Ganga flows from South to North in the eastern side of the city (Varanasi). Which means that the entire city is situated on the West side of the river. Thus from ancient times till today, city of Varanasi has not only been guiding the world in religious rituals and spiritual knowledge, but has enlightened the world in this field. In the North side of the city, the river Varuna is flowing from West of east which unites in Ganga towards its North East. The city has a slope to its North East which is widespread and extended. That is the reason, the natives of this city are best in all aspects economically, cultural and intelligence. Because Ganga river flows in its east, the glory and popularity of Ganga is wide spread from ancient times till present day, and it will stay forever This is also one of the reason of its spiritual progress. All the 84 Ghats' which starts from its North side like Rajghat' and ends in (Assighat) in its South are East facing. That is the reason the glory and popularity of the Ghats is commendable. The confluence of Varuna and Ganga river in North - East of Kashi is also enhancing its religious and spiritual progress. Because of the expansion of its North East sides the natives are generally sweet tongued and pay respect to the elders. The North side of the city is elevated according to vastu, hence the natives of this city are kind hearted, sensitive and are blessed with good mentality. They are endowed with high intelligence as well. Because of the expansion in North West direction, they are very hospitable.

After the study of geographical situation of Banaras Hindu Vishva Vidhyalaya which is situated in North West directions of Varanasi city, it is found that it is expanded and elevated towards its North East direction. That is why the intellectual level of the students who study here is very high.

Pune has been called the 'cultural capital' of Maharashtra. Pune is the Sixth largest city of India and is an important industrial center. India's most manufacturing companies for Industrial Vehicle and exported vehicles like Tata motors, kinetic, Diamalar Kalslur force motors etc are situated in Pune. In the decade of 1990 other famous software companies, like Infosys, Tata Consultancy services, IBM, have opened there centers in the city. That is the reason the city has emerged as the main information and technological center of the country. Pune film Industry is a renowned one. Pune city has the facility to provide high education in almost all the subjects that is why it is called the 'Oxford of the East'. 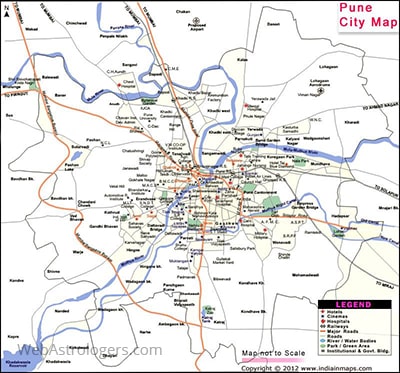 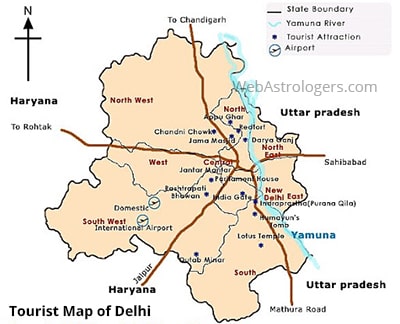 After studying the map of Delhi it was found, Delhi is situated on the West side of Yamuna river and from Vastu point of view, the presence of the river in East and North East of the city is very auspicious. The Northern side of the city is extended, that is the reason from economical point of view the richness and prosperity of the city is commendable. The intellectual level of the natives of the city is best. They have the positive attitude towards life. That is why they use their resources in more meaningful ways. The positivity, which flows from its east direction entranced the progress, popularity and dignity. The popularity and progress which the city has gained in its West direction of Yamuna river, is unmatched. Due to the situation of river in the East of Red fort and Jama Masjid, these monuments have been popular from the ancient times till today. Nairatya side of Delhi is reduced and cut which is the cause of its instability. That is why the city has been the victim of constant foreign and political attacks till today. But its South portion of the city is extended, that is why its popularity and prestige is stable. An elevated South-East portion is beneficial for progress and prosperity. People get easy success with less efforts.

Agra is an important tourist place of Uttar Pradesh. Tourists from all over the country and abroad come here. Agra city is renowned for Taj Mahal, Agra fort and mental asylum. According to Vastu, Yamuna River, which flows from North to East sides of Agra city enhances the popularity of the city. That is why Agra city has got world recognition and is known as the seven wonders of the world. Dayal Bagh which has got unprecedented glory is situated in North east direction of the city and is maintaining a spiritual recognition. 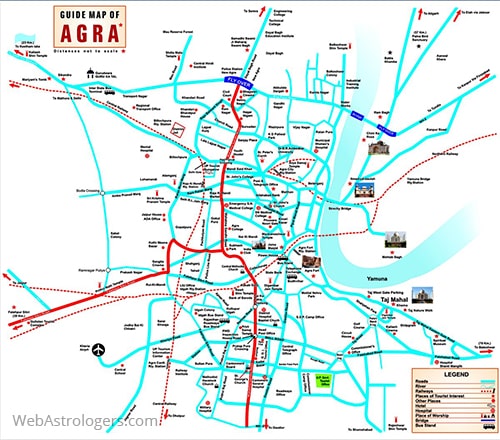 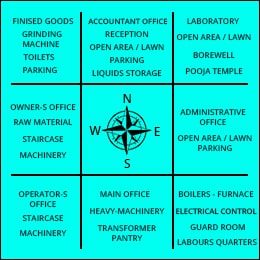 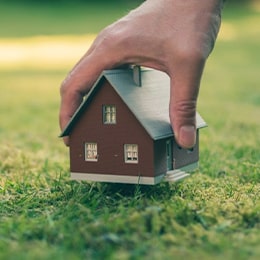 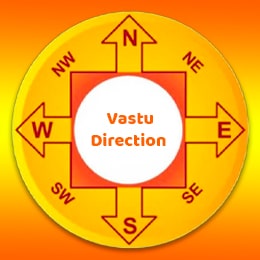 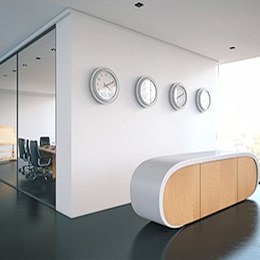