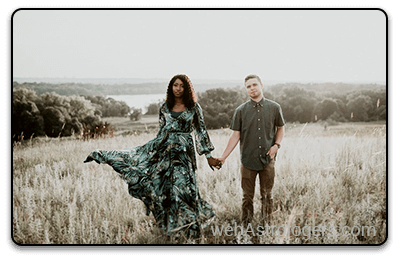 In the compatibility between Capricorn female and Aquarius male, there are advantages and disadvantages to the correlation between both of them. As she is ordered and he is unsteady, they do have a determined personality in common. They just get to their objectives in a dissimilar way. But if both are in agreement, they may grow.

The Aquarius Male will most likely make the first move to the Capricorn female, for he is a friendly person and she is very probably found in the corner. The Capricorn female would rather watch the crowd, and he likes roving from group to group talking about new matters.

Aquarius man likes a good argue, and when he finds the Capricorn she stands in their discussion. She attempts to read his dotted thinking method while he tries to bring her out of her shell with his inspired thoughts.

The one thing the Capricorn lady can notice is that his search for knowledge is approximately as strong as her work ethics. She welcomes his expedition to make better the world and the Aquarius man notices her as a firm base off of which he can put his thoughts. And due to this first relationship, she will accept take their correlation towards the bed.

If they want to make a pleasing sexual pairing, she will need to add herself extra in the moment emotionally and he will need to establish a connection with his very sensual side. He may present her some enthusiasm and she may continue with him through her unbelievable energy. But these two needs to be open minded if they want to get a balance for highest satisfaction.

It is at the bed where they will need to find the middle ground in their sexual method, as the Capricorn female is totally want the physical gratification and the Aquarius male is totally want emotional encouragement. She doesn’t bear in mind dream or mind games, and he enjoys in that sort of foreplay.

While the Capricorn women are unhurried and stable in their outlook, Aquarius men are flirtatious and loving. She will see this sort of love-making playful, for she likes her tried and tested way. He, on the other side, will become bored with the same conventional outlook regularly even though they possess good love relationship.

She is more firm and he is more variable, which may make a crack in the Capricorn and Aquarius relationship. He doesn't prefer to keep on in one place for long time, and she might be hurt by his changeable temperament. And if that occurs, she will attempt to manage his changeable manner. He will not agree to her dominant approach, and it will be a battle of wills to see who breaks first.

But both of them fight with sense, and the Capricorn female and Aquarius male might find a middle place if they are capable of actually pay attention to one another. And if they can find a shared purpose to join together to support, they will make an effort to understand their partner’s exceptional viewpoint to everything. Once that occurs, they will dedicate to the correlation for lifetime.

If the Capricorn female and Aquarius male can find a shared purpose to join together to support each other in a difficult time or situation, they will find mate for life time.